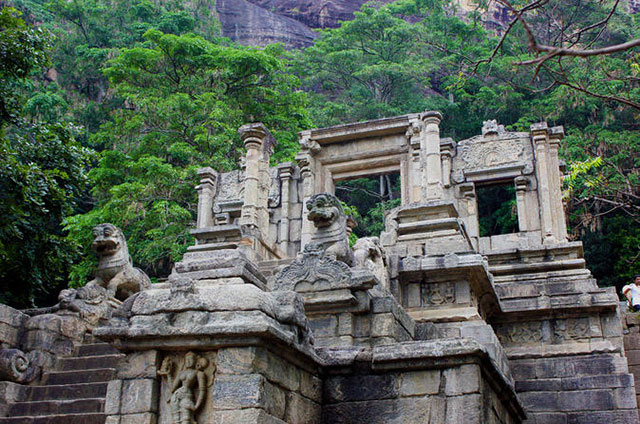 Yapahuwa’s Rock Fortress is located in the North-Western Province of Sri Lanka. It lies approximately between Kurunegala and Anuradhapura in the southeast of Mahawa. The original name of this Buddhist heritage was Yapawwa, but now it is called Yapahuawa.

In the late 13th century (1273–1284), Yapahuwa served as the capital of Sri Lanka. Built on a 90-meter high rock in the style of theSigiriya rock fortress, it was a palace and military fortress against foreign invaders.

The palace and fortress were built in 1273 by King Buwanekabahu I (1272–1284). Many of the signs of the ancient military defenses are still visible and the ornate staircase is its largest showroom. On top of the rock are the ruins of a stupa, a Bodhi tree fort and a cave used by Buddhist monks, indicating that the site was formerly used as a Buddhist monastery, like many rocks and hills. There are several caves at the foot of the rock. One of rock has a shrine with Buddha images. There is a Brahmi inscription in a cave. At the right foot of the rock, there is a moat and two forts. There are many ruins including a Buddhist shrine in the premises.

Of all the ancient ruins in the country, the Yapahuwa complex is not popular with many visitors, but it is remarkable. However, it is known as one of the best archaeological sites in the country.