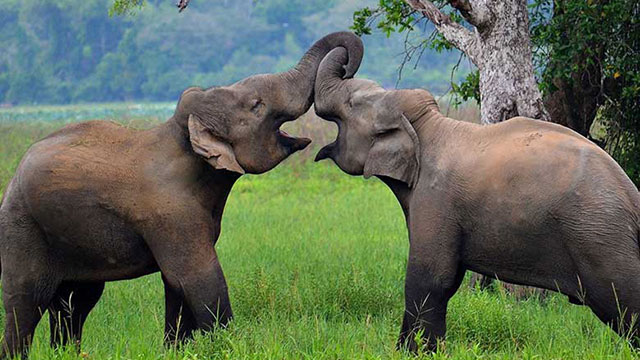 Wasgamuwa National Park is a natural park located in the Matale and Polonnaruwa Districts of Sri Lanka. It was announced in 1984 for the protection and protection of displaced wildlife during the Mahaweli Development Project and is one of the four national parks designated under the project. Originally designated as a natural reserve in 1938, the area was renovated in the early 1970s as a natural reserve. Wasgamuwa is a protected area for ​​Sri Lanka’s elephant herds. It is one of the important bird sanctuaries in Sri Lanka.

The national park has an annual daily temperature of 28 °C (82 °F) and has a dry climate. Annual Rainfall Between 1650mm and 2100mm. Rain falls during the Northeast Monsoon season from October to January. July-September is the dry season. The highest elevation of the national park is the Sudu Mount (White Mountain), which is 470 meters (1,540 feet). Quartz and marble in the soil of the national park. Contains. Wasgamuwa Forests represent dry evergreen forests of the Dry Zone of Sri Lanka. The park consists of primary, secondary, riverine forests and grasslands.

There are 23 species of mammals in the Wasgamuwa National Park. The park houses a herd of 150 Sri Lankan elephants. The mash elephant (Eliphus maximus vil-elephant) roams near the Mahaweli River. The purple langur and toke makke monkeys of the park are endemic to Sri Lanka. Water buffaloes and Sri Lankan deer are common, and leopards and bears are rare in Sri Lanka.

The number of bird species recorded in the park is 143. This includes eight endemic species. The endemic Red-faced Malkoha is endemic to Sri Lanka’s wild birds. Bobcats and Sri Lanka Spearfalls are the most visited species in the National Park’s reservoirs and streams. A rare Sri Lankan frog can be found here. Another rare species of chewed winged cock is found near the Mahaveli River.

One of the eight amphibian species of the endemic and endangered Fagervia pulla park. Of the 17 reptile species recorded in the park, five are endemic. The most endangered reptile species are the Sphinx lancaskinus spp. Among the 17 species of fish found in the park’s aquatic habitats are the endemic Gara Celloensis and Coble. Eight of the 50 species of butterflies in the park are endemic. This national park has many endemic animal species and many local and foreign tourists visit this park.