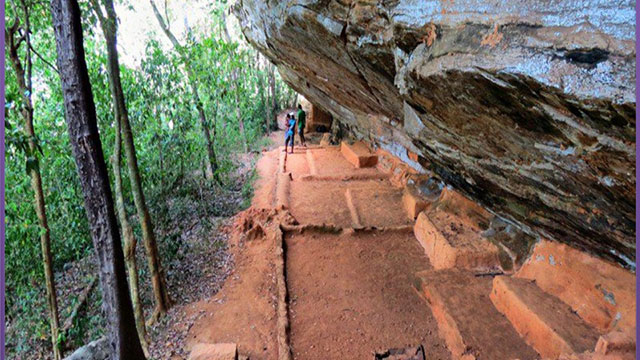 Samangala Arana Senasana or Samangala Forest is an ancient cave temple located in Ampara, Sri Lanka. This temple is situated about one kilometer west of Kohombana Junction on the Ampara – Mahayaya main road. 23 miles (14 miles) to Ampara town. The monastery has been formally recognized by the government as an archaeological site in Sri Lanka.

The Samangala site in Ampara became famous because of the Samangala Cave and the forest monastery. Like many dunes on the eastern slope of the mountains, caves can be seen. They are used as monasteries. You have to climb a flight of stairs to reach the Bo Mall and the main cave. It is believed that Buddhist monks came to these caves for medicine.

Today, a group of Buddhist monks are meditating in caves. Some have been sentenced in the middle of caves. Below the bo courtyard, you can see a stream. Several Christian Brahman inscriptions can be seen in the Samangala Cave. One of Dagoba’s inscriptions is found in a cave on a rocky hill. A cave inscription depicts a style similar to that of the Sanchi Stupa in India. It confirms that Sri Lankans had contacts with other monks from different countries.

Samangala cave temple is a wonderful place to remember sobriety. So a trip to the forest monastery will bring more relief to your mind and soul. Apart from that, the adventurous journey through the jungle to the Samangala forest will be an amazing adventure for the tourists.