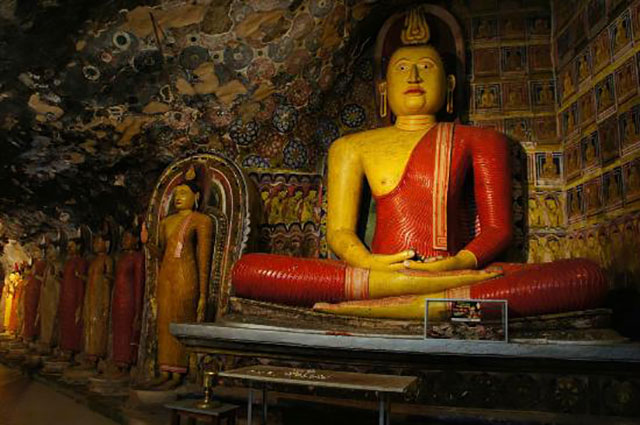 The Ridi Viharaya or the Ridhi(Silver) Temple Theravada Buddhist Temple in Ridigama, Sri Lanka. Built during the reign of Dutthagamani of Anuradhapura, this temple is considered as the place where the silver lupus was supplied to complete the Ruwanvelisaya. According to the Mahavamsa and Tupavansa chronicles, the Ridi Viharaya complex was built because it helped King Dutugemunu to fulfill his dream of completing the Ruwanvelisaya.

With the arrival of Arahat Mahinda in the 3rd century BC, there are around 25 caves around the buddhist temple which are believed to be inhabited by Arahat monks. C. During the reign of Keerthi Sri Rajasinghe of Kandy in the 18th century (1746-1778 AD) the temple was revived. During this time, the Udaya Temple was added to the complex. There are several associated temples. Kumara Bandara Devalaya and Pathini Devalaya were also established.

Rock to the south of the entrance is the site where the founding temple was built. It is also considered the place where King Dutthagamani sat before worshiping the temple. At the top of this rock lies a small stupa.

The Waraka Velandu Temple is a Polonnaruwa era temple, meaning “Waraka Velandu Temple”. This building is about the size of a room. It’s stone roof rests on eight stone pillars and is decorated with four sides. Hindu influences can be seen in the carvings of female dancers, which are not usually found in Buddhist temples.

The Hewisi Mandapaya (or the Drummers’ Pavilion) located in front of the Maha Vihara contains a bowl of rice and other objects of historical value. The centuries-old palakkiya, used to carry elderly monks, is also seen hanging on its roof.

Statues of Gautama Buddha of the Maha Vihara.

The Maha Vihara or the main shrine is located in the Rajata Lena (or Silver Cave); A giant rock shaped like a cobra’s head. The cave is believed to be the site where the original silver lopez was discovered. The temple is the oldest of all the buildings in the complex and was renovated and extended by the Parakramabahu I (1153-1186 AD) in Polonnaruwa.

The Udaya Viharaya or the Upper Temple belongs to the Kandian era and has a Buddha statue and the Sandakada Pahana with the dragon Therana. This moon pahana is unique in that it is a semicircle rather than a triangular shape and is common in the Kandyan era. The main statue is surrounded by sculptures of Hindu deities. The stall contains paintings of legends and animals of Ravana: Ramayana, a central figure in the legend. There is a stupa on the right side of the temple. The Hindu Devalaya is located at the entrance and is dedicated to the God of Defense.