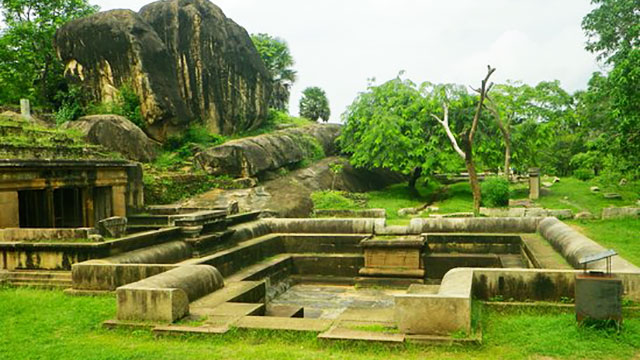 Ranamasu Uyana in Anuradhapura, used by the ancient Sri Lankan royal family, is a Ranmasu Uyana situated between Tissa Wewa and Isurumuni, spread over forty acres. The Ranmasu Uyana is best known for their stone-carved bathtubs with a sophisticated hydraulic mechanism. Using the pressure difference subtly, water is pumped from Tissa Lake to the park’s swimming pools. Nearly three thousand years ago, the technology used to build a flawless luxury swimming facility was at its highest. You can see it in the ruins here. You can see the ruins of three pools. The pool is decorated with black stone carvings.

Also, the ruins found in some of these places are said to have been used by the monks who lived in Isurumuni to meditate here. There is also a map called Stargate, engraved on a rock. This is similar to Abu Ghurab in Egypt and ‘the gateway to the gods’ in Peru. However, this Map is believed to be the secret code for asterisks.

Built with rock formations, this park is a beautiful place to enjoy natural beauty.