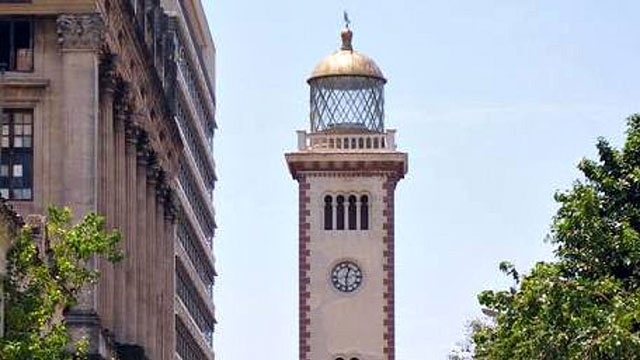 It has been used in the past for both a clock tower and a lighthouse. At present, it does not use as a lighthouse and is used only as a clock tower. You can see it at the junction of Chatham Street and Janadhipathi Mawatha (formerly Queen’s Road) in Colombo Fort.

The tower was designed by Emily Elizabeth Ward, wife of Governor Sir Henry George Ward, as a clock tower. The construction work was undertaken by the Department of Public Works under the supervision of John Fleming Churchill. The twenty-nine-meter high tower was the tallest building in Colombo at the time.

The clock mechanism of the Colombo Lighthouse and the Clock Tower are very important. It was designed by renowned British watchmaker Dent. Dent has also assisted in the creation of the world-famous “Big Ben” at Westminster Palace in London. The main bell weighs approximately two hundred and fifty kilograms and the two supporting bells weigh a hundred and fifty kilograms.

The most prominent part of the lighthouse, the Marine Lights, was installed in 1867, and the Diroptic-Light was designed by “Chance Brothers”. In the early days, the light was obtained with the help of kerosene. The lighthouse, which guided many sailors for many years, was relieved of work by the construction of the modern Galle Buck lighthouse on Marine Drive.