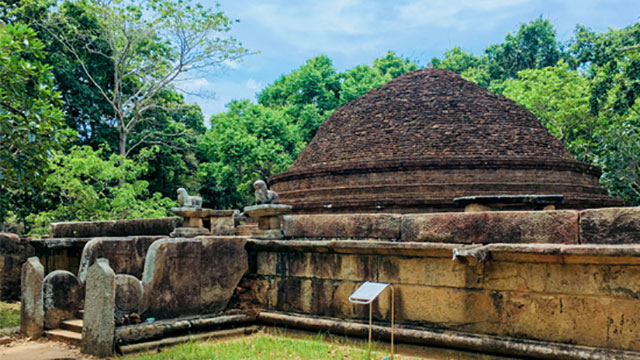 Magul Maha Viharaya is an ancient Buddhist temple located in Ampara District, Sri Lanka. The temple is located in the northern boundary of the Lahugala National Park, about a kilometer from the town of Siyambalanduwa. It is 22 km away from Pottuvil town. About 11 yards away. Lahugala is a part of the Ruhuna Kingdom of ancient Sri Lanka.

The history of Magul Maha Vihara dates back to the reign of King Kavantissa (205-161 BCE) who ruled the Ruhuna kingdom of ancient Sri Lanka. There is evidence that the temple was built by the king in the 2nd century BC.he was married to Princess Viharamahadevi, the daughter of King Kelani Tissa the place. According to other sources, the temple was built by King Dhatusena (463-479 AD) and many other kings rebuilt it centuries later.

After the establishment of the Magul Maha Vihara, it was renovated by several kings. A 14th-century inscription reveals Viharamaha Devi, the wife of King Buwanekabahu IV of Gampola and Queen Parakramabahu VI of Gampola who donated several acres of land to the temple. The Magul Maha Viharaya is inscribed on this inscription as the Ruhunu Maha Viharaya. Other sources indicate that the temple was built after King Dapula I (661-664 AD) listened to the teachings of Buddhist monks. At some point in history, it is thought that there were about 12,000 monks. It is attributed to the size of the ancient temple.

The ruins of the ancient temple can be seen today. The idol house, the Bodhi Tree (sacred fig) and the stupa are all in good preservation. The ruins of a small chapel with the main gate, a wall built around all the buildings, and an extraordinary moonstone lamp at its entrance are some of the structures seen today. All the elephants on the moonstone have horsemen on them and there is something invisible in all other Sri Lankan moonstone lamps. The stupa of the Lahugala Magul Maha Vihara is built on the upper terrace and has three flights of stairs. At the top of this staircase are images of large lion guardians.

The ruins of the Magul Maha Vihara are one of the main tourist attractions of the Eastern Province. This temple is an archaeologically protected monument in the country.