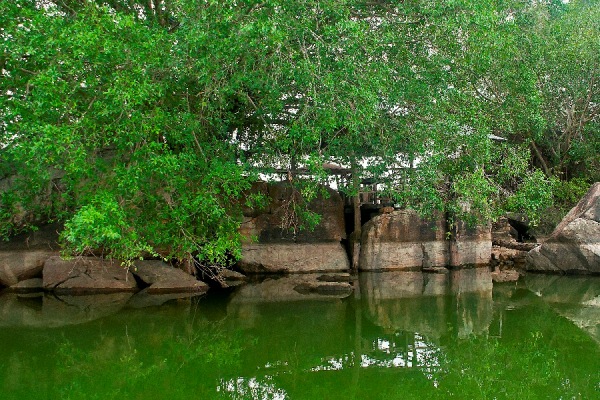 Maduu oya is a national park in Sri Lanka which was established under the Mahaveli Development Project and serves as a catchment area for Madura Oya Reservoir. The park was named on November 9, 1983. The importance of the park is to provide a sanctuary for wildlife, especially the park for elephants and protect the immediate catchment areas of five reservoirs.

The topographic feature is the rocky hillsides 8 km (5.0 mi) southwest of the park. The park’s water systems comprise 15% of the land area and include five reservoirs; Maduru oya, Ulhitiyah, Rathkinda, NDK, and Hennanigala reservoirs and tributaries of Mahaveli and Madhuru oya. The Northeast Monsoon is dominated by the climatic conditions in the Dry Zone of Sri Lanka, which extends from October to February. The mean annual rainfall is 1,650 mm (65 inches) and the mean annual temperature is about 27 ° C (81 ° F).

The park is of historical value. That ancient Buddhist shrines of various periods in Sri Lanka’s history, including temples, dagobas, statues, devals and hermitages, include the ruins of Henanigala, Kudawila, Gurumpura, Uluketangoda, Verapokuna and several other places. BC. An old slope dating back to the 6th century, Maduru oya, was recently discovered on your old broken clay wall. BC. The earliest Brahmanical inscriptions of the 3rd century are found in Kandagamakanda.

There are two circuit bungalows and one hostel in the garden office opposite the Madura Oya reservoir. For the lovers of nature, the Ultheia Campground is available. There is a well-manicured wildlife museum at the park entrance.