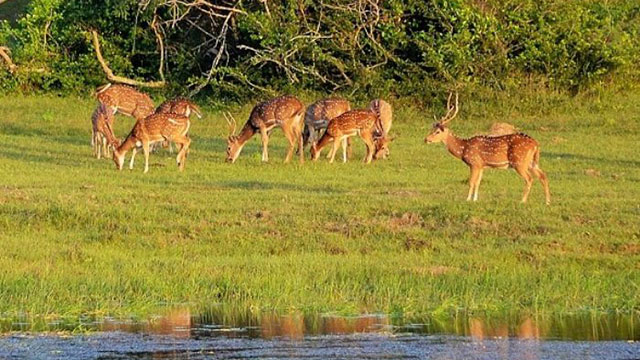 Lahugala Kitulana National Park is one of the smallest national parks in Sri Lanka. The park is an important habitat for Sri Lankan elephants and endemic birds. The National Park contains the Lahugala, Kitulana and Sengamuwa areas which are empty into the Heda You River. Originally designated a wildlife sanctuary on July 1, 1966 On October 31, 1980 the protected area was upgraded to a national park.

The mean annual rainfall in the area is about 1,650 mm (65 in). The northeast monsoon lasts from November to December. There are two dry periods: May to October and January to March.

Flora of the National Park is classified into dry evergreen forests of the Dry Zone of Sri Lanka. One of the leading grass species of the genus Saxolypis interrupta is a major food source for elephants. The most common flower species in the garden include Drypets sparia, Manlycar hexandra, Beria cordifolia, Vitex pinnata, Chloroxylon swetenia and Gold shower tree.

Among the many wetland birds found at Lahugala Kitulana are the great white pelicans, the purple herons, the painted orcas, the low follower, the anus spp. Includes Kingfisher. Stained pelicans, Asian open bills and fur-necked hooks are also reported to visit the wetland. The last reported duck duck duck event in Sri Lanka has gone extinct. The Red-faced Malkoha and the Sri Lankan Spearfall are two indigenous birds of the park.

You can come here and visit the many beautiful places and animals.