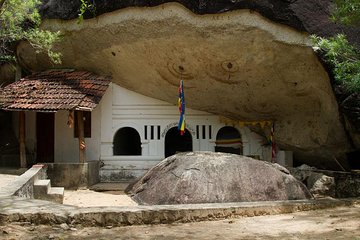 Kudumbigala is an abandoned sanctuary. It is a monastery complex situated in the range of Ampara rock.Kudumbigala Monastery Complex Built-in 246 AD during the reign of King Devanampiyatissa. It was originally established as a refuge for Buddhist monks who wanted to get out of the busy cities. This temple was discovered in 1954 by devotees called Matri. Archaeologists have uncovered more than 200 caves in this monastery. The Kudumbigala monastery complex is located on a 600-acre site.

Inscriptions and other evidence in the Brahmi script of the recently discovered cave, the Great Sudarshana Leena, indicate that Kudumbigala was established as a hermitage before the pre-Christian era. An inscription states that one of the ten giant warriors, the gifted warrior Nandimitra, the “Dasa Maha Yodhaya”, built and gift for great Sudarshana Lena Arahants.

The interior walls of the caves are plastered and painted with paintings and murals. Kudumbigala is a more incomplete complex of caves and sand buildings than other archaeological sites. Apart from that, several Buddhist monks of Kudumbigala Vihara practice meditation today. But wildlife in the nearby forest is never harmed.

Today you can see the ruins of the cylindrical Dagoba monastery. The monastery consisted of ponds and pillars. The surroundings are very pleasant and calm.