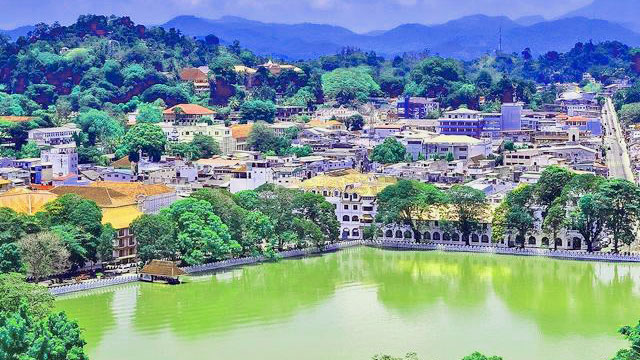 Kandy is a major city in the Central Province of Sri Lanka and was the last capital of the ancient kings of Sri Lanka. Kandy is an administrative and religious city and the capital of the Central Province. Kandy is the home of the Tooth Relic shrine (Sri Dalada Maligawa), a sacred place for Buddhists. It was declared a World Heritage Site by UNESCO in 1988 and Kandy has been known by various names in the past. Chief among them is the name Senkadagala. During the colonial era, the English name Kandy was derived. The Portuguese have shortened it to “Kandy”.

According to reports Sena Sammatha Wickramabahu was the first king of the Kandyan Kingdom and ruled as a semi-independent kingdom under the Kingdom of Kotte and became the new capital. When Konuppu Bandara, who was known as Wimaladharmasooriya I ascended the throne, he embraced Buddhism and bringing to the sacred Tooth Relic of the Buddha in Kandy kingdom.


After the conquest of the coastal areas by the Portuguese, Kandy became the capital of the last remaining independent kingdom of the island. Several invasions by the Portuguese and saved the kingdom at that time by people. The last ruling dynasty of the Kandyan Kingdom was the Nayakkara clan. With the subdued of Kandy to the British, its last king, Sri Wickrema Rajasinghe, was taken prisoner by the British to Vellore Fort, South India

Kandy is located in among the mountains and forests of the island. Various mountain ranges, including Knuckles Range and Hanthana Range, offer an elevation of 500 meters above sea level. The rest of the country, especially in the coastal regions, has a relatively wet and cold temperature over the tropical climate. However, since the climate in Kandy is still tropical, the average temperature throughout the year is above 18 degrees Celsius. The city has a dry climate from January to April, with the monsoon season from May to July and October to December. The inter-monsoon season is from March to mid-May with light rain and heavy humidity.