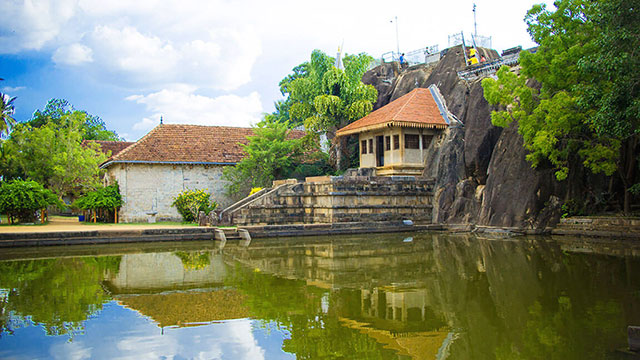 The Isurumuniya Temple is located near the Tissa Wewa in Anuradhapura. There are three main carvings. it is the Isurumuni romance couple, the elephant pond, and the royal family. The temple has a history of about 5000 years. It is also said that King Rawana was born here and Pulasthi Rishi lived there. The Isurumuniya temple was built during the reign of King Devanampiyatissa. King Kasyapa rebuilt the temple and named it “Bapulwan, Kasubgiri Rajamaha Vehera”.

The Isurumuni love couple is a sixteenth-century creation. The woman is sitting on men’s lap and raising her finger. The love couple is also known as Saliya, son of Dutugemunu and the low caste (Sadol Kula) maiden Asokamala whom he loved.

The Royal Family engraved on a plate of granite contains five human figures. King Dutugemunu is considered to be in the middle of it. The king wore a tall crown on his head and a puna noola around his chest. On either side of him are carved images of women.

Four elephants in the black stone near the pond of the Isurumuni temple are carved as they bathe. These elephants have been found to be very similar to the elephants found in India’s “Mamallapuram”.

Here you can visit at any time of the day and see the ancient murals and carvings.