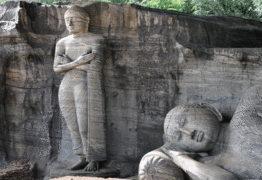 Also known as the gal viharaya and originally the Uttaraarama. It is a Buddhist rock shrine located in Polonnaruwa, an ancient city in the North Central Province of Sri Lanka. It was invented by Parakramabahu I in the 12th century. The central feature of this temple is the four rock relief statues of the Buddha, which are carved on a large rock. The images consist of a large seated figure, another small figure sitting in an artificial cave, a standing image and a sleeping image. These are considered to be the finest examples of ancient Sinhala sculpture and carvings. The Gal Vihara is one of the most visited monuments in Polonnaruwa.

The images of the Uttararama style follow a different style than those of the earlier Anuradhapura period and show some significant differences. Each image is engraved with the maximum area of ​​the rock, and their height is determined by the height of the rock. The ruins of the brick walls of the land show that each statue has its own idol house. Uttaraaramaya was the council of monks to purify the Buddhist clergy and later set up a code of conduct for them. This code of conduct is inscribed on the same rock face with images of the Buddha.

The first pretext you come across is the Buddha sitting in meditation. He sits on a lotus. The rock behind the statue is decorated with “Vimana” carvings. Four small statues of Buddha can be seen on these decorations.

Next there is a small Buddha statue (about 15 feet high) carved into the rock. There are two gods on either side of the statue. It is believed that this engraving represents the representation of the Buddha who went to the heaven called “Thusitha” to preach to his mother. The statue is painted in pure gold and the treasure hunters have burned logs of the statue and melted the gold.

The third is a Buddha statue. This is controversial to some and is thought to be the statue of Ananda Thero at the place where the Buddha passed away. This 23 feet tall statue is thought to have been done by a later king. There are two statues in the seat of the chronicles and one in the statue of King Parakramabahu (1153-1186).

The next and the last is a giant statue of Buddha passing by. This is 80 feet long. The ear lid that falls along the body, one foot slightly behind the other (the toes are not positioned equally), this marks the death of the Buddha.