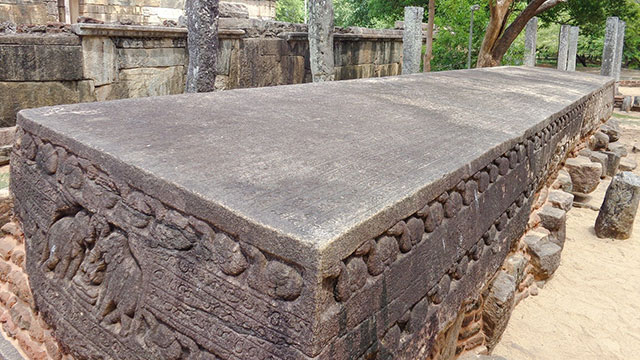 It is a creation of King Nissankamalla. Gal Potha (Stone Book) is a well-known book that describes the reign of King Nissankamalla and his qualifications to be King of Sri Lanka. This massive slab of 26’10 feet (8.2 m) long and 4’7 ft (1.4 m) long was brought to Mahiyangana due to the concerns of King Nissankamalla (1187-1196). The text is written in three columns and contains over 4300 characters in 72 rows. There are signs that the molten metal has been pierced into the engraved letters to bring out the characters more clearly.

Includes exaggerated facts about him and his Kalinga clan. At the same time, there are many unbelievable facts. He also included some of his works by King Parakramabahu the Great. Two rows of geese (hamsa) form the boundary of the beautiful carved rock. Among the plan is a carved image of Goddess Lakshmi. Also in the corner is an elephant carving.

On your way to Polonnaruwa, you can see the engravings and the details of the rock carvings on the rock.