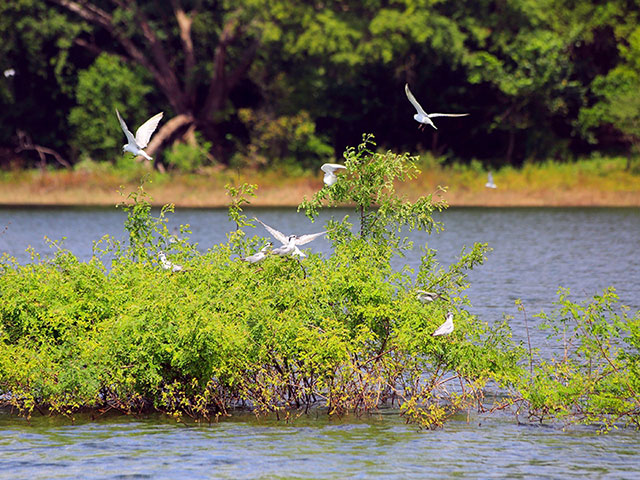 Established in 1954, Sri Lanka’s Gal Oya National Park in the reservoir serves as the main catchment area of the Senanayake Samudra, the largest reservoir in Sri Lanka. From 1954 to 1965, the park was managed by the gal oya Development Board until the Department of Wildlife Conservation took over. An important feature of the National Park is the elephant herd which is seen throughout the year.

The elevation of the park varies from 30 m to 900 m. The mountains of the park are the Danigala, Nilgala, and Ulpatha. The Northeast Monsoon receives rainfall and the average annual rainfall is 1,700 mm (66.93 inches). Crossing the Senanayaka Sea by boat from Inginiyagala is an alternative access to the National Park. Bird’s Island in the reservoir is an island used for bird nesting.

32 mammals have been recorded in the park. Sri Lankan elephants, Sri Lankan ax deer, muntjack, aquatic buffalo, Sri Lankan sambar deer, Sri Lankan leopard, talk monkey and wild gold. Among the reptile species in the park are the Magar crocodiles and the star tortoises. More than 150 species of birds have been reported in the Gal Oya. the local Bill Pelican and the red-faced Malkoha are the birds that inhabit the park. Indian Cormorant, Oriental Darter, Gray Heron, and Low Whistle Duck are among the common water birds in Senanayake Reservoir.

Gal Oya National Park has no accommodation in the park. The lounge and bungalow are located in Inginiyagala and are 23 km from the park office.

Gal Oya National Park offers visitors the opportunity to enjoy the beauty and wildlife of the boat safari as well as the jeep safari. Boat safaris allow you to land on an island called “Bird Island”, where the birds flock together. The Jeep Safari, a two-kilometer 5-kilometer and 13-kilometer runway, offers views of elephants and leopards. March to July is the best time to visit the Gal Oya National Park. During this period, elephants can be seen swimming by one island to another in the Maha Senanayake Samudra reservoir.