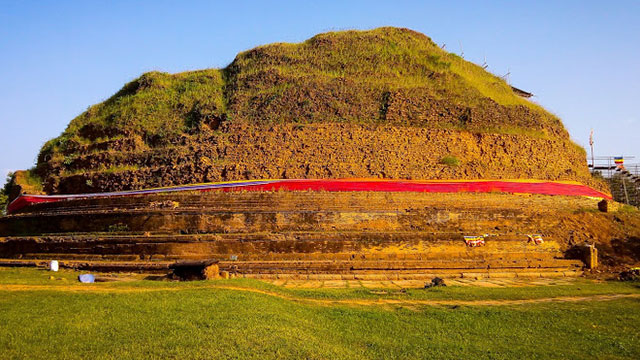 Dighavapi is a Buddhist shrine and archaeological site in Sri Lanka as mentioned in historical thirtieth-century records. The Importance of Digawapi The Buddha himself is associated with the legends of visiting this site.

The Digawapi is the earliest form of the Buddha representing a large number of stone pavements of various sizes and the footprints of Sri Buddha (footprints of the Buddha), indicating the prosperity of this complex in ancient history. The statues of the Buddha were later replaced by the Dighavapi Stupa. In ancient times, carvings decorated with slave columns, ‘Pun Kalasa’ and other decorative pillars were discovered.

Deegawapi is one of the 16 Buddha’s blessed places. On Nagadeepa’s second visit, the Lord Buddha was invited to the Kelaniya by Mani Akikka of the tribe, Naga. Upon attaining Nirvana, the Buddha in his 8th year decided to go to Kelenia for the third time. During this visit, he came to Dighavapi with 500 Arhath and took time to meditate.

According to the great chronicle Mahavansa of Sri Lanka, this stupa was built by King Saddhatissa (137-119 BC). It is generally believed that this stupa is a “paribogika” stupa, and no special relics have been placed in it since the Buddha has blessed the place. But historian Reverend Elavela Medananda Thero believes that this stupa is composed of Buddha’s claws. An inscription on a gold foil discovered during excavations reveals that the stupa was repaired by King Kavantissa (164-192).

When the Department of Archeology commenced reconstruction in 1964, the stupa was 110 feet high, but in 1845 a document by Badigoda Buddhakita Thero rose to 185 feet. The circumference of the stupa is about 1000 feet. Currently restored to a height of 30 feet