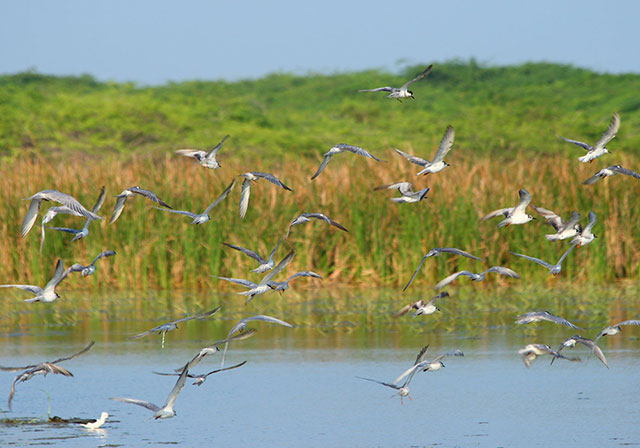 Bundala National Park is an internationally recognized paradise for migratory water birds in Sri Lanka. Bundala is home to 197 species of birds. The specialty is the large flamingo, which migrates to large flocks. Bundala was declared a wildlife sanctuary in 1969 and was renamed a National Park on January 4, 1993. In 1991, Bundala became the first wetland in Sri Lanka to be declared a Ramsar Site. In 2005, the national park was designated a biosphere reserve by UNESCO. It is the fourth biosphere reserve in Sri Lanka.

Ecological areas of the national park include seven terrestrial habitats and six wetlands. Dry thorns and herbs are the most common plant organisms. 383 species of plants belonging to 90 families have been recorded from the park. Blue-green algae dominate the phytophthora in all lagoons, including species such as macrocystis, nostok, and oscillatoria. Hyacinth, water lilies and typhia angustifolia reeds are found in the swamps and streams. The vegetation is mainly comprised of Acacia shrubs including Dicrostachys cinerea, Randia dumetorum, Sisyphus sp., Gymnosporia emarginata, Carissa spinarum, Caparis selenica and Cassia spp. Trees of the forest include Boehinia racemosa, Salvadora persica, Dripetes sparia, Manilkara hexandra (missing in Sinhala), and the less common Chloraxylon swetenia, Azadirachta indica and Feronia limonia. The halophyte plants grow in the environmental conditions of the national park. Salicornia brachyata and Halosarcia indica are examples of salt tolerant plants. Lumnitsera racemosa trees are common in small mangrove patches found in the Bundala lagoon. Situated on the sandy hills to the east of the Bundala village, the Manilakara Hexandra Forest is a unique forest in Sri Lanka.

Bundala National Park has been identified as an important bird area in South Indian and Sri Lankan wetlands. There are 324 vertebrate species recorded in the national park, including 32 fish species, 15 amphibians, 48 ​​reptile species, 197 birds and 32 mammals. There are 52 species of butterflies among invertebrates. There are about 100 species of water birds in Bundala wetland habitat and half of them are migratory birds.

Authorities will reassure you that there is clearly no human intervention in the park. You can walk freely in the National Park. But you have to take a jeep or van to experience the safari adventure in the area. The road is somewhat blocked but you are allowed to explore the richness of biodiversity. Several environmental projects are being implemented in the park. In detail, a turtle conservation project and an invasive tree eradication project continue to protect the identity of the Bundala National Park.