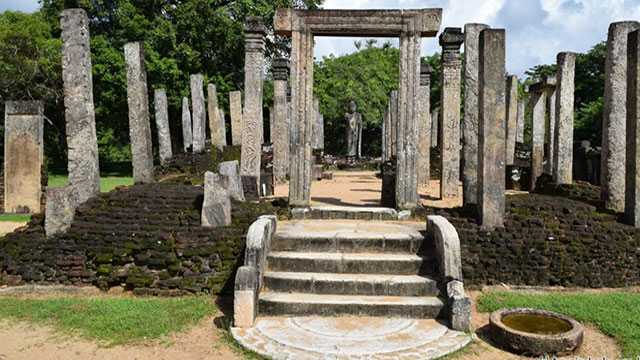 The Atadage Dalada Maligaya is a tooth relic shrine built by King Vijayabahu I (1070-1110). The building was built on 54 stone pillars. The tooth relic shrine is placed on the second floor and is often made of wood. Access to the second floor is through a granite staircase. The staircase is still a few steps away from the top of the building. There are three Buddha statues on the bottom and only the center remains today. It is considered to be the only surviving building of King Vijayabahu I.

The word “ata” in the Atadage means eight. In this case, the building may have been named because of the presence of eight relics, including major tooth relics, or because it was completed in eight days. The building was built in eight days as there is evidence that it was used in other buildings of the Anuradhapura period. The moonstone is a good example. It was brought from Anuradhapura to be placed here.

The “Velikara” inscription on the left of this building is significant. It is written in Tamil and clarifies that the protection of the tooth relics was done by a mercenary Tamil army and not by the Sinhalese. All that remains today are the foundations and stone pillars.