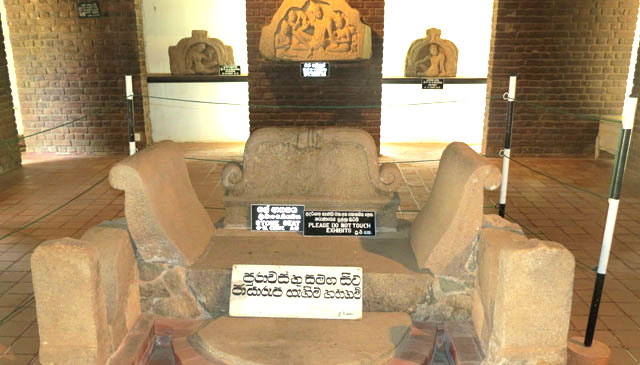 Most of the objects in the Archaeological Museum of Anuradhapura date back to pre-Christian times and reflect the glory of a bygone era, when the Sinhala civilization was at its height. Apart from that, the museum also contains valuable Buddha statues, inscriptions, coins, paintings and antiquities. There is a reconstructed relic chamber and a large-scale structure around the Tuparama Dagoba (Round House). Large limestone Buddha statues from Maradankadas up to the 6th century AD are depicted in many exhibits such as a statue of Buddha and a coral Buddha statue made of granite from Mannar up to the 8th century AD. There are statues as well as small figures made of ivory. In addition, you will find jewelery and medieval coins belonging to the reigns of Parakrama-bahu, Nisanka-Malla and Lilavati. Both the interior and exterior of the museum showcase historical thrillers. The museum also provides basic information on the changing lifestyle and habitats of the rural population from time to time. With the change of several eras in Sri Lanka they had to change clothes. So you can get an overview, more knowledge and experience by visiting the museum.

Visitors who wish to know more can visit the museum from 8.30 pm to 5.30 pm except on Tuesdays and every public holiday.