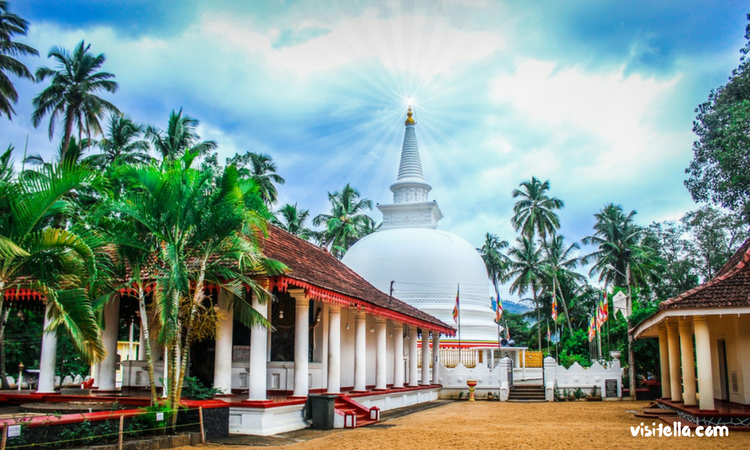 Muthiyanganaya Raja Maha Viharaya is an ancient temple located in the center of the Badulla District. Buddhists believe that Gautama Buddha had come to this place. It is also considered to be one of the Solosmasthan. The Buddha arrived in Kelaniya, Sri Lanka on the invitation of the Naga King as his third visit to the 8th year after attaining the enlightenment. A local chieftain named Indaka invited the Lord Buddha to his home in Badulla. At the end of the sermon by the Buddha, something was needed to commemorate the coming of the Buddha.  The Lord Buddha offered him several hairs and few drops of sweat which were converted into pearls. Peoples believes that the sacred hair and pearls are buried in this stupa.

King Devanampiyatissa further developed the original stupa and transformed the land into a temple complex. The stupa was further renovated by King Dhatusena, King Vijayabahu I and Parakramabahu I.

It consists of the Thorana, the Makara Thorana, the main image house, the central image house, the Sath Sathi Vihara, the statue of Indaka, the statue of Maithree Bodhisattva, the stupa and the Bo tree. The pandal(Thorana) is seen at the entrance to the temple and the  Makara Thorana is erected at the entrance to the main image house. The two iconic mansions have been renovated in the 1960s and 1970s, and their ancient look has disappeared. The present stupa was built in 1956 and measures 65 feet in height and 270 feet in diameter.

King Rawana ruled the country using Badulla as the capital. Many factors have been found to substantiate it. Sita Eliya, Sita Fort, and Ravana Ella described in the Ramayana can still be seen today. It is also said that the Rama and Rawana war also took place in this area.